I happened to be in the little Breton town of Quiberon last week.  The town itself is a pleasant enough resort perched at the extreme end of a peninsula that juts into the Atlantic.  The local specialities are caramels, crisp cookies made with butter and sea salt (think shortbread) and, most especiall, sardines.  Several sardine factories offer their wares in stylish shops (yes even canned sardines have style in France).  Above and beyond the cookie boutiques there are more pastry shops per acre than I've ever seen.  And of rather high quality I might add.  What caught my eye, though, was a  patisserie that had decided to take the local fishy specialties in a totally different direction, mainly using sardines, mackerel, tuna and the like as fillings for macarons. 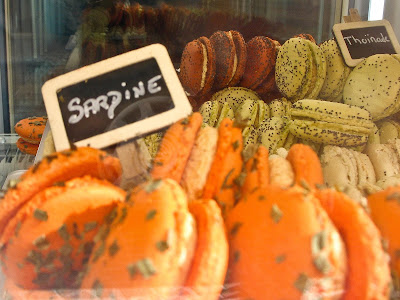 Weird?  Yes.  Good?  I'm a little ambivalent there, though I should add that I only tried the sardine one which tasted, well, like a paste of sardines inside of a macaron.  Very sweet and savory all at once.  It would probably be intriguing in the right context.  I'm not sure walking down the street was exactly it.  Yves & Diane Deniard, 22 rue de Port Maria, Quiberon, France, +33 (0)2 97 50 19 87.
Posted by Michael at 6:13 PM