The morning after Kali Puja, the atmosphere is even thicker with the air-borne particulate from what must have been tens of thousands fireworks and crackers that blew up last night. It’s a little ironic that the city has banned smoking just about everywhere but in your home. I’d hard enough to imagine what the lungs of a non-smoking Kolkatan look like, the smokers must be in dire state indeed. But I don’t have much time to ponder the public health concerns from nicotine in the developing world. My crash course in Indian desserts is about to accelerate. 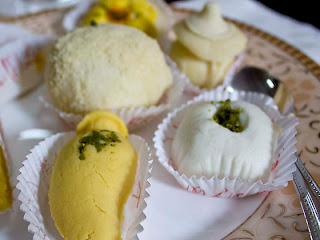 Today I made an appointment with K.C. Das, or to be more precise with Dhiman Das, one of the partners in this venerable institution. K.C. Das is like Vienna’s Demel, an urban icon that people like to grouse about: “It’s not as good as it used to be….you can find better sandesh…rossogolla…at (and they fill in the name of their favorite sweetmaker).” But it’s on every list of the city’s best confectioners. The company’s sweet-making facilities and offices are located in Baghbazar, an old neighborhood in Kolkata’s north end where many of the city’s most famous sweetshops are located. Not that I’m allowed to visit the factory—I’m quickly whisked off to the Das family home where I wait in a dim old-fashioned parlor hung with modern art and religious icons.

Dhiman Das is meticulously polite but only modestly forthcoming. He tells me the family legend about the invention of rossogolla, the shop’s claim to fame. The way he tells the story, his great, great, grandfather Nobin Chandra Das created what is now one of India’s favorite desserts through a process of trial and error. He was looking to create a sweet moister that plain old sandesh, something that would quench thirst as well as the sweet tooth.

I saw rossogolla being made later in the day at a local neighborhood sweetshop. You can see the setup in the picture below. 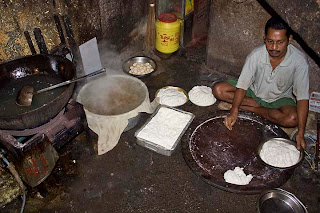 Presumably the arrangement in the K.C.Das kitchens is a little more up-to-date but the process is much the same.

To make rossogolla you take chhana (fresh cow’s milk curd cheese) and knead it to the correct consistency, then you stir in a little maidam (wheat flour) and make balls of about an inch (or a little more?) in diameter. These are then boiled in syrup, drained and placed in cool syrup. In the process, they blow up to more than twice their diameter, become lighter and bouncier.

There are numerous variations (mango rossogolla anyone?) but one of the classics, apparently created by Nobin Chandra’s son, is rossomalai 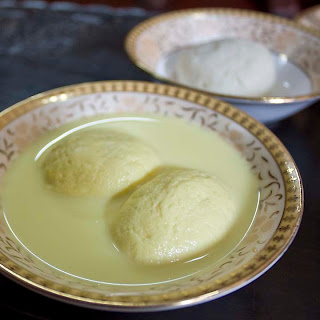 (rosso refers to syrup and malai to milk). This is made exactly the same way as rossogolla except that in this case it is soaked in a milk-based and saffron-tinted syrup. The result is creamy, delicate and almost like a really good ile flottante, but much less insipid. Dhiman Das tells me all the Westerners like it the best.

As we sit, he sets a feast of sweets before me, not only the famous rossogolla and rossomalai, but also a whole assortment of sandesh: plain, stuffed, light and airy as well as dense and chewy. There are also a whole series of new inventions where rossogolla is sandwiched with sandesh. I’m not entirely convinced by these. I think the textures detract from each other. Still it is all very educational.

Dhiman Das sends me home with two big cans of rossogolla. They’ve been canning these since the thirties. We’ll have to see what the folks back home have to say about it.
Posted by Michael at 1:26 AM No comments:

In Kolkata, the morning’s thick, pink air fills once again with a slowly-building crescendo of blasts and beeps. Much to my amusement, the newspaper features a story on regulations meant to minimize the noise pollution of Kali Puja, when celebrants set off fireworks and firecrackers to serenade the goddess. Firecrackers that generate more than 90 decibels at 5 meters distance are supposed to be banned (for comparison, that’s like a jackhammer at about a meter). The next day The Telegraph reports that almost 800 people were arrested in the night for noise violations. But my question is, aren’t these firecrackers just another note in the city’s cacophonous cantata, just the loudest crash of cymbals at the concert’s end. What’s more, Kali isn’t exactly the type to go in for law and order. 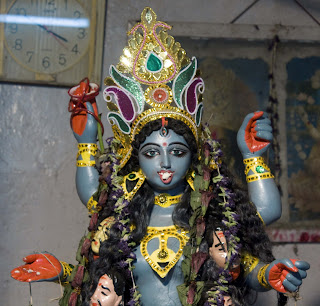 She’s heavily into sweets though. When you visit the temple in Kalighat, the little shops that line the alleys surrounding the temple as well as the cramped courtyard inside sell basically two things. Little sweets made of thickened milk and sugar, some flavored with a few grains of cardamom, and garlands of hibiscus. The goddess is apparently as fond of the blood-red flowers as the sugary snacks. The shops get deliveries of a great mounds of the sweet paste which they then form into disks about the size of a silver dollar. These then get packaged into a dry leaf cone with a few blossoms to decorate the offering. You then line up (for hours!) to present the sweets to the priests. 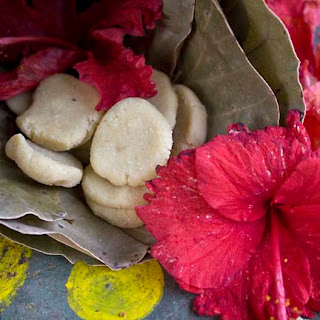 But I’m getting a little off subject here. Because the sweets for which Kolkata is really known are not considered acceptable to the goddess or any of the rest of the Hindu A-Team for that matter. What Bengal is know for are desserts based on a fresh curd cheese, called chhana in Bengali. It’s made more or less the same as Spanish queso fresco or, for that matter, North Indian paneer, by curdling hot milk with a little acid and draining off the whey. (Curdled milk is considered impure to ultra-orthodox Brahmin and thus the gods.) To make paneer, the curds are then pressed into dense bricks and then typically used in savory recipes. For chhana the milk solids are kneaded to an appropriate consistency and then further processed into a whole menagerie of sweets, the most prominent of which is called sandesh. This can take the form elegant little cheesecake-like pillows or be denser and stuffed with nuts or other fillings. There are also variations that are simmered in syrup or soaked in a saffron-tinted milky liquid. There exist dozens if not hundreds of permutations.

But it all comes down to the kneading, I’m told by Joydeep Chatterjee.

What’s the point of coming to India if you can’t get yourself a guru? And I couldn’t ask for a better one. Not that Joydeep exactly fits the stereotype, he is clean-shaven and modestly rotund. Though not modest in most other respects. When he speaks, whether indoors or out, it is always to the balcony. It turns out he trained as a physicist at Oxford (or was it Cambridge?) with a specialty in chaos theory. (Now that’s something that comes in handy in Kolkata!) These days he mostly works as a journalist and his obsession, as I find out in intricate detail after a two-hour lecture, is the field of Bengali sweets.

Bengalis can’t knead the chhana, he tells me, “this is the kind of job which is not possible for Bengalis to do because the kind of bone structure we have, the kind of anatomy we have, the kind of inner strength that we have with this kind of weather.” No, what you need is a guy from Bihar. And he assures me he knows the best one in Kolkata. “I’ve always told him that if I were the king—or some such thing—in India I would be adorning your hands with diamonds and whatever I have” he says, adding, “He’s such an important man…” Because unless the chhana is kneaded to the right consistency it doesn’t have the right grain. And that, Joydeep insists, is worse than a disaster. I’m promised an introduction to the chhana master on the following day.

You get this really warm and cozy feeling in your stomach when you finally meet your guru, especially when he takes you along to visit his pals.
Posted by Michael at 1:39 AM No comments:

On the Eve of Kali Puja

The first thing that hits you as you emerge from the city’s grubby arrivals terminal is the air: thick and acrid, like a still, poisonous fog. The second thing is the cacophony of traffic. Indians treat their cars as percussion instruments with a wide range of taps, raps and blasts that express their intentions, emotions and position in the hierarchy of the road. The caste system is alive and well here. The diesel-belching trucks are the Brahmin of the road, bullying everyone out of their path in the choked roadway. Buses and taxis compete for second place, the latter unequal in mass, certainly, but they make up for it by their sheer entrepreneurial whim. Then come the skittish passenger cars and the three-wheeled auto rickshaws. Finally, the human propelled rickshaws have their own unique spot in this hierarchy. 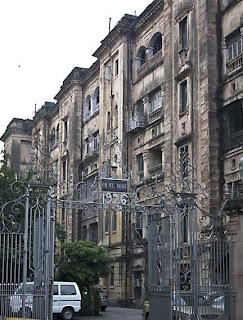 Because they are the untouchables the rules don’t really apply, allowing them to weave through the fitful flow with a kind of reckless oblivion. And the pedestrians? They are insects, scurrying to preserve their lives.

It takes well over an hour to get to the center of the city, past lakes and ponds, and mud huts with sagging roofs surmounted with great billboards advertising luxury high-rises. Kolkata itself could be a lovely city, a Barcelona on the Ganges. It is full of charming, wacky and just plain odd buildings that remind you of what a peculiar place the Indian raj must have been. The Anglo-Indian cuisine that developed here is surely one history’s more grotesque miscegenations, but the architecture that dates from the years when Kolkata was the colonial capital is delightful. There are gorgeously crumbling mansions in a vaguely beaux-art meets Taj Mahal style as well as handsome apartment blocks with names like Palace Court. But of course, that isn’t what the first time visitor notices. What you see the trash and the disrepair and the poverty. But please, don’t come here, if you can’t see beyond that, because there is so much more. 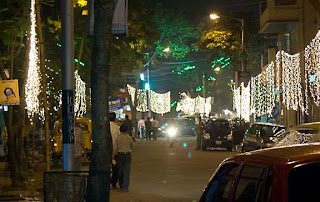 It is the eve of Kali Puja, one of the many festivals, or pujas, that Kolkatans celebrate. Elsewhere, the holiday is called Diwali and it is dedicated to the Lakshmi, the goody-two-shoes goddess of grace and prosperity. But not here. In West Bengal it is devoted to Kali, the vengeful mother goddess. Block associations, sports clubs and everyone else with the time and the money puts up shrines all around the city with life-size or mostly bigger idols of the goddess with her necklace of skulls and her tongue stuck out in surprise. There are prizes given for the best shrine, the best lighting and even the best sound effects. Garlands of colored lights make some blocks look like Christmas in Brooklyn. 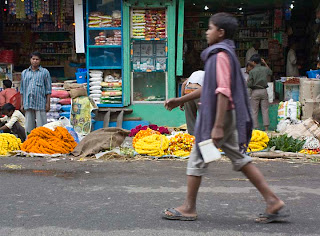 Along S.N. Banerjee Road, garlands of flowers lie in twisted piles of yellow and orange along the side of the dusty road. Opposite, the shops full of carefully framed images of the goddess are fronted by chest-high baskets of sugary sweets dyed in colors too outrageous 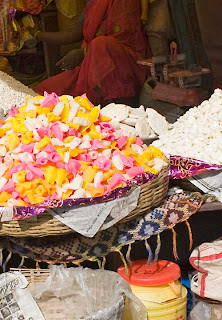 for mere nature—all watched over hundreds of palm-sized statues of the approving goddess, each hot-pink painted idol, carefully tied in a cellophane cocoon. She gets her sweets tomorrow.
Posted by Michael at 12:18 AM No comments: