Sluka, another of Vienna’s famed Zuckerbäckers is holding up less well under the Christmas onslaught. Admittedly, its location next to the Rathaus puts it just a few steps away from the ginormous Christmas market that takes over the square in front of City Hall. The market is great fun in a hokey, carnival kind of way. Seemingly, there are miles of stands selling kitsch and wurst. And Sluka does not bear the overflow with grace. The service is more brusque than efficient, the harried waitress demanding payment even as she drops my order on the table. Looking over the shop-worn desserts I had selected the strudel, thinking it a safe bet. Not so, it turned out to be soggy, mushy and overly sweet. No need to go to Vienna for this!
Posted by Michael at 5:00 PM No comments: 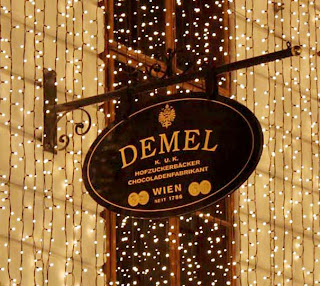 Two weeks before Christmas, Demel is a madhouse. At five in the afternoon, the waitresses cut through the swaying shoals of tourists like sharks on a mission. The customers barely take heed though, transfixed as they are by so much towering confectionery. Demel’s is easily the city’s most picturesque Café-Konditerei with fittings that date back to the late 1800s. Admittedly, 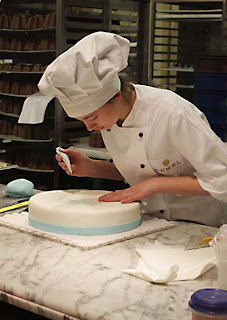 the design is just about as chaotic as the crowd with a confusion of styles that comes with a century of decorative accretions. The latest change came in 2002 when DO & CO the catering corporation that bought the storied confectioner added an open kitchen to the mix. Here, the curious can ogle the Sacher-Tortes being iced and chocolates receiving their final flourishes. I am of two minds about this. I love seeing the meticulous workers carrying out their métier, but it does turn the café into an even more Disneyesque production that it already is. 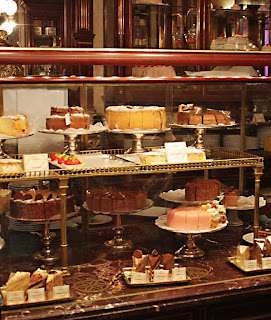 All the same, the cakes look damn good—not merely the tortes but also the strudels, tarts, and other more homey confections. I stick to the cakes though, ordering a slice of Maroni-Torte, a four layer affair of chocolate and chestnut cream robed in an infinitesimally thin coating of marzipan and an overcoat of chocolate glaze. Textbook perfect and the little “kiss” of chocolate dipped chestnut cream on top just adds to the delight. Demel’s at least seems to be surviving the corporate takeover rather well. 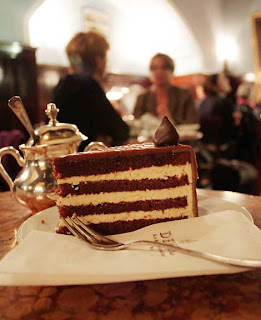 Posted by Michael at 9:20 PM No comments:

Though Gerstner dates back to 1843, the Café-Konditerei on Kärtner Strasse, one of Central Vienna’s main shopping drags, is of much more recent vintage. No Gemütlichkeit here, rather a contemporary urban vibe keeps the room humming with conversation, the steam-engine hiss of the large, utilitarian espresso machine and the constant timpani clink of china on marble counters. 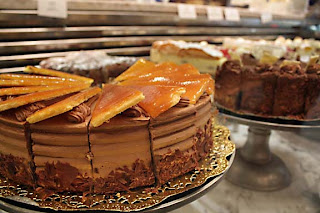 The cakes are picture perfect though my Dobostorte —admittedly a dense confection of chocolate buttercream and some eight layers of vanilla cake—is perhaps a little denser than need be. And the coffee is thin. 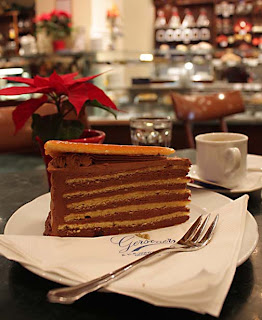 And I’m a little put-off by the display of French-style macarons in the window. It makes me wonder if the management’s heart is really in the right place. I’m probably being unfair though, who am I to deny the Viennese these delightful Parisian treats.
Posted by Michael at 6:59 PM No comments: 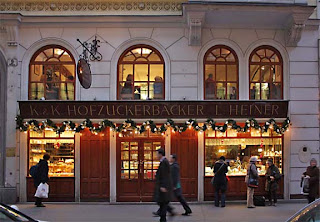 A short walk from St. Stephen’s cathedral, L. Heiner is on Wollzeile 9, more or less cattycorner, from Hans Diglas’ café. Heiner has more Gemütlichkeit than class, the waitresses, outfitted with folkloric costume and orthopedic shoes, bustle with a slightly frenetic efficiency handing out fractions of cakes and sections of tarts. The Sarah 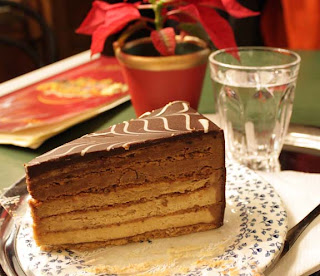 Bernhardt Torte (€3.50) I order is a happy surfeit of cream upon cream; three layers of chocolate buttercream and two of mocha sandwiched by thin layers of walnut cake. All this is covered with a chocolate glaze. Yes, it’s a little over the top but what would you expect from a cake named after the famed actress. 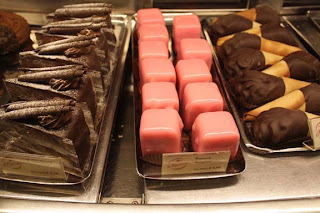 Posted by Michael at 8:49 PM No comments: 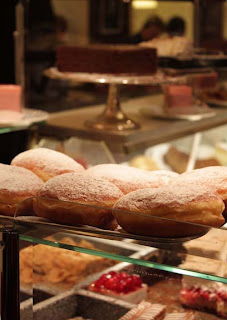 I met with Hans Diglas at his family’s café at the height of Jause, the Viennese ritual of coffee with a little something on the side. The tables were filled with scowling, grey-haired men cemented into corners, protected from the world by their daily paper; young Frauleins in jeans inhaling cigarettes and exhaling gossip; tourists with lust-glazed gazes eyeing the Apfelstrudel and jam-filled Krapfen (doughnuts). Diglas is one of the few cafés that make their own desserts. Made fresh everyday, Herr Diglas boasts—as opposed to so many of the city’s Konditerei (pastry shops), he tells me, that freeze their cakes and defrost according to need. He declines to name names. Hans Diglas is hospitable to a fault, signaling to the waiter to bring over four desserts, “just to taste,” he assures me. Nevertheless he is quick to disabuse me of any illusions I may have about Viennese cafés and dessert. Not only did cafés here not serve desserts until very recently, he assures me, they were prohibited by law to do so. Though not every dessert was outlawed. For example the Nusskipferln (nut-filled horn) he insists I try was allowed. But forget the tortes for which Austrian metropolis is renowned. Those came later, at least to the kind of café Herr Diglas owns.

There is another sort of café, the so-called Café-Konditerei where desserts are the star attraction. These are the ones where ladies of a certain age traditionally linger throughout the afternoon nibbling on the endless permutations of butter, sugar and flour that the Austrians refer to as Mehlspeisen, (literally flour foods). The long history of the more typical café is of a place where men have congregated and consumed drug beverages, not merely the stimulating varieties but also wine, punch and other spirits. But sweets? Well European men are traditionally not supposed to have a sweet tooth. In Vienna the Café-Konditerei owners were so concerned that they were losing out on the male traffic that they petitioned the authorities to allow them to serve savory foods so that the coarser sex might have something to eat if they accompanied their lady friends to the confectioner’s shop. 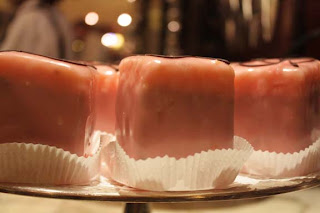 Originally those confectioners set up shop to cater to the upwardly mobile bourgeoisie who couldn’t afford their own Zuckerbäcker as these artisans are know in Austria. When a lady wanted to host an afternoon tea, she would contract one of these shops to supply the necessary sweets. The fashion for a sweet afternoon Jause seems to have arrived with a fashion for all things French around the turn of the nineteenth century. Eventually, the sweet shop would add a few tables and respectable ladies had a place to chat and nibble on Torten while their husbands cut deals in a smoke-filled Kaffehaus.

But back to those Torten. Don’t image for a moment that there is some antique origin to those delightful strata of sugar and fat. Even that delectable lodestar of Viennese confectionary, the buttercream, dates to the end of the nineteenth century. Jószef Dobos is credited with inventing it in the 1880s. It’s worth remembering that it is virtually impossible to produce buttercream on a commercial basis unless you have dependable refrigeration. So we can thank the industrial revolution not only for flush toilets and espresso but buttercream as well.
Posted by Michael at 7:24 PM No comments: