I returned recently from a quick weekend trip to Vienna—a few too many tortes for two days—not that I’m complaining. But between bites I had a conversation with Ingrid Haslinger which got me thinking about stories and history, or at least about the kind of tales that are told about food.

Dr. Haslinger is a food historian and probably the most knowledgeable person in Austria (or elsewhere for that matter) on the culinary habits of the Hapsburg court. She’s written books about it and if you visit the jaw-dropping collection of Imperial Silver (the so called Silberkammer) in the old imperial palace (the Hofburg) she’s the one who wrote the labels that explaining what’s what.

At any rate we got to talking about the story of the Sacher Torte. The legend—as it is told in repeated retellings —is that the young Franz Sacher was once in the employ of Prince Metternich. (This was the string-pulling, reactionary chief minister of Austria in the early 1800s, the guy who is generally credited with setting up the post-Napoleonic European order. ) One day, the prince had a few of his chums over for dinner for which the fifteen-year old Sacher whipped up the first Sacher Torte. The noble-blooded diners applauded and the world’s most famous cake was born.

You have to admire the narrative: the adolescent wunderkind struck with the spark of genius, recognized immediately by the savvy old diplomat and his cronies. It’s a great story. The only trouble is, it’s probably not true. At least that’s Dr. Haslinger’s very credible hypothesis. Other than the rather incredible age of the young Sacher there is the date when this was all supposed to happen: 1832. The Sacher is a chocolate cake which is coated with apricot preserves and then a fudgy chocolate glaze. The problem is that chocolate smooth enough to form the glaze hadn’t been invented yet—that would come in 1879 when Lindt developed a way of making chocolate super smooth by processing it with a conching machine. But the other bit of damning evidence comes from an interview with the old Sacher himself that appeared in 1906 where he says he came up with the cake in 1840s. So what about the Metternich story? It may well originate with his son Eduard who recounted it in a issue of the Wiener Zeitung in 1888 (or supposedly did according to Franz Maier-Bruck's Das grosse Sacher-Kochbuch—I haven't been able to find the article in the actual newspaper). Did Eduard misunderstand something his father might have told him or did he simply put two and two together and get five? Hard to say. He had run a hotel since 1876 and a little publicity probably couldn’t hurt. It's interesting to note that the first recipe for it appears two years later though!

Let’s say for the sake of argument that the Metternich story is inaccurate. Isn’t it still of enormous interest, especially to a food historian? Certainly that it was widely circulated gave the cake inestimably more cachet than the more probable story that Sacher invented something like this cake (even if the glaze was later refined) in the 1840s to use in his catering business for ships on the Danube. If it was indeed first promulgated in the 1870s, the Mettenich origin myth tells something about the era of increasing industrialization and the PR potential of a good story in an era of increasing mass media. Dr. Haslinger tells me that we Americans are too prone to overemphasize the role of public relations in the history of food. Perhaps. But I would make the argument that the fable has had a greater influence popularizing the torte than any real history. Stories matter.

Posted by Michael at 2:59 PM No comments:

After long resisting Vienna's Oberlaa chain (how could they be good if they have so many branches?) I succumbed. You see I had coffee with the founder yesterday and he is/was by all accounts altogether brilliant when comes to pastry. 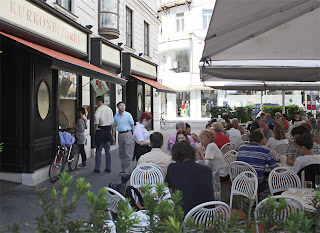 The Neumarkt branch spills out into the square, packed with a mixture of locals and a smattering of foreigners on a sunny Sunday afternoon. Oberlaa is probably the least traditional of the best known Viennese Konditerei. True to their reputation, the table menu features the "neu, new, nuovo, Mango-Schokolade Torte:" think layers of flourless almond cake (with a little praline perhaps?), Pariser Creme (chocolate mousse) 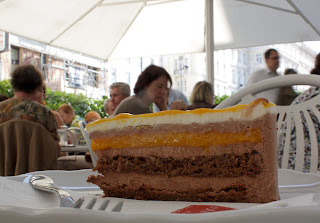 and mango puree. And, oh yes, a thin layer of whipped cream. It's light and fruity, a nice balance of creamy chocolate and bright, tropical intensity.
There's a bit of Paris there in the mango—maybe even a little Guadelope—but it works. Perhaps because the chocolate isn't too strident.
Their chocolates are good too if a little sweet for my taste. A little like a Whitman sampler but one that actually tastes good.
Posted by Michael at 10:05 PM No comments: