Spain isn’t the first place you think of when you contemplate dessert. Just why is a little unclear, the next-door Portuguese are dessert obsessed. Lisbon has more pastry shops than Paris, with a much smaller population. So why are the Spanish so lukewarm about dessert? Perhaps there isn’t really a place in it in the Spanish meal system. The Spanish eat a small breakfast but given the late meal times there is the national institution of snacking—tapas. You eat tapas at eleven to get you to lunch at 2 or 3 and you eat tapas in the early evening so you’re not starving by the time the 10 PM supper hour arrives. It’s hard to fit in a leisurely coffee and dessert somewhere in there. Perhaps equally important, the savory snacks end up doing the jobs of sweet snacks in places like Vienna and Brussels. Instead of a doughnut and coffee there is a slice of tortilla española and a glass of cava. Portugal, on the other hand, has much more of a coffee culture (the Portuguese seem to have as many words for coffee as the Inuit do for snow) so that a late morning snack will most likely be some sort of pastry washed down a sweet slug of caffeine. This is all theory mind you generated by a visit to Barcelona. 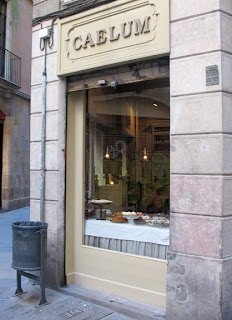 Barcelona is one of my favorite towns. It has the perfect location, right between the beach and mountains. It has wacky architecture. It has great food. Not only are there the ubiquitous tapas but the Spanish explosion of innovation is mostly centered here. The Boqueria is the world’s finest and largest covered market. But dessert? The pastry shops tend to be few and far between and vaguely French. The ice cream is expensive and either a pale imitation of Häagen Dazs or gelato. Still, there is at least one sweet spot worth seeking out. Located deep in the Barrio Gotíc, Caelum (c/De la Palla 8, tel. 933026993) specializes in serving and selling Spanish monastery sweets. You can taste them upstairs but it’s more fun to go to the downstairs cellar that once served as a Jewish baths. It’s all gloomy and candlelit in the best possible way. There are cakes of various kinds which seem just a little too homemade (and the ubiquitous brownies) but there is also a wide selection of packaged monastery sweets you can taste. Many seem to be based on some sort of almond paste which is fine by me. 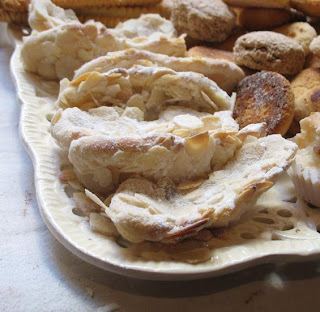 The lunitas, for example are a kind of half-moon of very thin pastry enclosing a moist marzipan-like filling. The pastel de piñon is much like an Italian pinoli cookie but somehow denser, chewier and more intense. 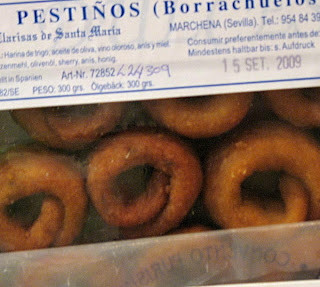 Pestiños (also called borrachuelos on the package, presumably because they’re made with wine—borracho means drunk in Spanish), on the other hand resemble tiny doughnuts little bigger than a wedding band. There’s also something distinctly medieval about them, tasting, as they do, of honey and olive oil. The fourth monastery sweet I tasted was something called a polvoron, a kind of cookie that is the shape of a very large sugar cube. As you bite into it, it shatters into a powder (thus the name which comes from polvo—powder), it's barely sweet with perhaps just a hint of cinnamon. This is one of those cookies, like biscotti, that cries out for some hot chocolate, or perhaps a sweet monastic liqueur?
Posted by Michael at 11:11 AM 1 comment: 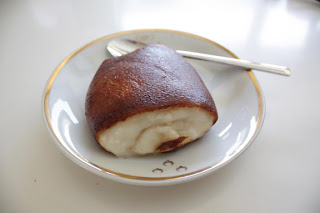 Tavuk Göğsü is about the closest thing to medieval blancmange. It is a milk-based pudding, thickened with rice starch and chicken. Yes chicken and plenty of sugar. As you bite into it, it has a texture that is oddly both chewy and smooth with little shreds of chicken breast in it. When the pudding is made, the bottom is caramelized to give it that contrasting bitter dimension. It’s very good, really. And if you don’t like it there’s always baklava on the menu.
Posted by Michael at 6:56 PM 1 comment: