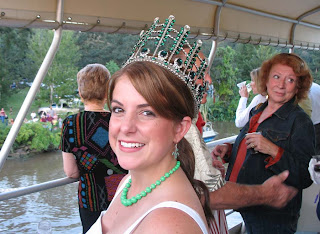 In the front seat sat last year’s Queen Sugar, an articulate young woman decked out in an emerald satin gown, her hair neatly coiffed to accommodate the green crown fashioned to resemble stalks of cane—looking for all the world like she had descended from the Emerald City of Oz. Her highness explained how she had spent the year touring local festivals often accompanied by other festival royalty–Queen Shrimp and Petroleum, (Shrimpers were initially dead set against oil rigs going up in their fishing grounds thinking it wreak havoc with the ecosystem—it turns out that shrimp loved the rigs, using them for breeding—next thing you know, the best catches were right by the rigs.) Queen Crawfish and Queen Swine–beating back the armies of NutraSweet apostates even as she held high the standard of the cane industry. Seated just in front of me was the outgoing King Sucrose along with his consort Queen “B.” “The ‘b’ is for bagasse,” the affable queen offered across her shoulder, “But we shortened it. You know, it just didn’t sound good.” (In Louisiana the word is pronounced “bag ass” with the accent falling on the second syllable.) Me, I was wedged in the back seat beside the rather demure sexagenarian crown prince and his queen bagasse to be. I have to say, all of them looked fabulous.
As we sped from New Iberia to Lafayette past the cane fields of southern Louisiana I kept trying to imagine these tux-bedecked farmers growing up in rural isolation, the mud-spattered sons and daughters of generations of cane growers. Electricity wasn’t common in these parts until the 1950s. Sugar was something you sold to make ends meet not something to waste on dessert. I asked them what sort of sweets they ate growing up.
“We never had dessert in the house,” the new queen consort shakes her head.
“We were poor,” His Highness King Sucrose LXV joins in, “Our snack when we came home was sweet potatoes and milk.”
“Him, they were rich,” the new queen points to her husband, “they were the first one’s to get electricity—and he got pig’s ears.” A broad smile ripples his abashed demeanor as he reminisces about oreilles de cochon, a kind of flat Cajun fritter folded over to resemble pig ears and soaked in Steens’ syrup.
Steens figures prominently in local mythology. They are the last local producer of cane syrup. This dense, dark, molasses-inflected syrup is made by boiling down cane juice until it reaches a thick caramel-like consistency. “Not that they make it like they used to,” grumbles another former King Sucrose, later, at that evening’s reception. “You know they used to harvest the cane by hand and feed it into the mill right there—but now they bring in the sugar syrup by the tanker load from South America.” I ask if still tastes the same. He nods his head, loathe to admit it. I met more royalty than I can count that night. And they all seemed pleased to see me.
Posted by Michael at 9:27 PM