Macarons can be made in dozens of flavors but given the season, I thought it would be fun to do a pumpkin version.  I have a bit of a pumpkin obsession, having authored a whole book on the subject:  The Great Little Pumpkin Cookbook.  Macarons do require a certain degree of precision but they are not as hard to make as some people would have you believe. 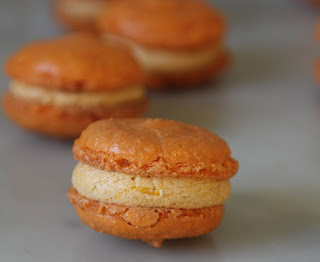 You will need some almond flour.  If you can’t buy it, you can make your own, just make sure the almonds are really dry.  Separate the eggs at least 1 hour before using or preferably the day before.  And if you want to ensure all the macarons are the same size draw circles of the desired size on the back of the parchment.  And do use a scale, it makes a huge difference here.  And, oh yeah, don’t make them on a rainy day!  (The pictures below were taken on a rainy day which is why the macarons didn't rise as evenly as they would otherwise.)

1. Line two 18- by 13-inch cookie sheets with parchment paper adhering them to the sheets with a little butter.
2.  If sliced, grind the almonds very fine in a food processor with about half the confectioners’ sugar, scraping regularly.  Add the remaining confectioner’s sugar and cinnamon and process until very fine.  Pass through a medium-coarse sieve and regrind the remaining almond bits if necessary.  If using almond flour, sift together with the confectioners’ sugar.
3.  Beat the whites and salt with an electric mixer until soft peaks form.  Add the granulated sugar and beat until stiff and shiny.  Add enough coloring for an attractive orange color and beat until homogenous. Using a rubber spatula fold in the almond mixture in two additions until just homogenous.  The mixture will deflate. 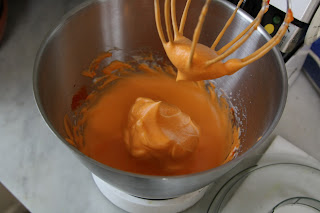 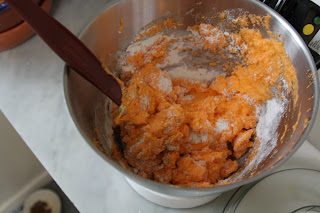 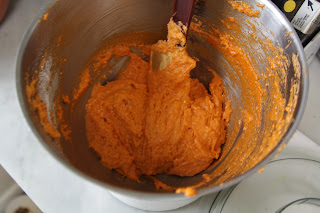 4. Fit a piping bag with a 3/8-inch (1 cm) round tip. Pipe the batter onto the baking sheets in circles about 1 inch in diameter. 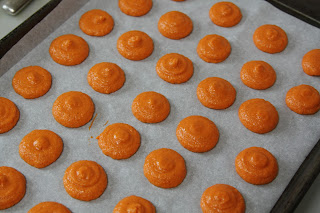 Let the macarons dry about 20 minutes (a little longer is OK if you need to cook them in two batches) so a little skin forms on the outside.
5. Preheat oven to 425°F.
6. Set the macarons in the center of the oven and immediately lower the temperature to 350°F.  Prop the door slightly ajar with a wooden spoon or something similar.  For small macarons, bake about 8-10 minutes, larger ones will take about 12-15.  They are done when shiny and hard on the outside.  When you pry one apart it should be a little moist in the middle.  Set on a cooling rack and cool briefly.  Remove from the macarons from parchment while still warm. Cool on cooling racks. 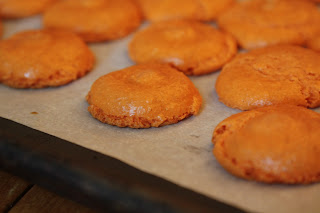 7.  Sandwich the macarons with 1-2 teaspoons of buttercream.  Set in an air-tight container and refrigerate overnight. 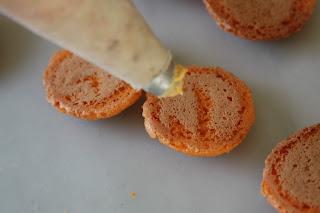 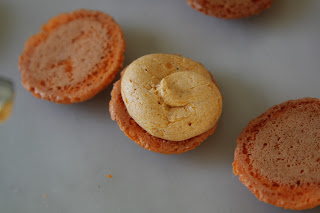 makes about 2 cups (enough for about 4 dozen macarons)

1.  Beat the egg whites in a stand mixer until they form soft peaks.
2.  Meanwhile combine the sugar and about 3 tablespoons water in a small saucepan over moderately high heat.  Bring to a boil and cook to the soft ball stage (235-240°F) on a candy thermometer.
3.  Gradually pour the syrup into the egg whites with the mixer on low speed. 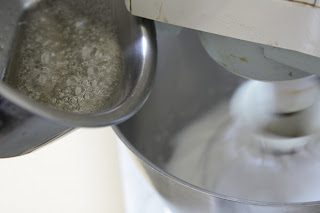 Scrape down the sides and beat on high speed until the meringue is at room temperature. 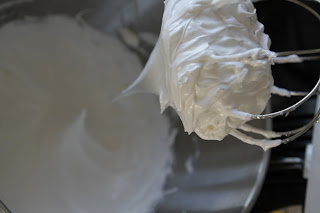 Gradually add the butter and salt, scraping down the sides of the bowl regularly.  Beat until completely smooth and fluffy. 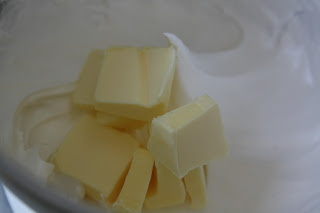 Gradually beat in the remaining ingredients adding enough orange food coloring to give the buttercream an attractive pumpkin color.  If the buttercream seems to be separating beat on high until it comes back together. 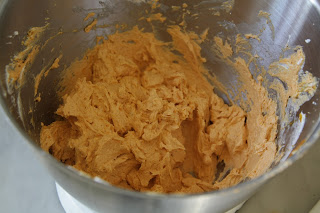 Among the many desserts that I never covered fully in Sweet Invention because I just ran out of time and space was the humble drop cookie, perhaps one of the defining recipes of the home-baked American repertoire. What I mean is all those doughs make with sugar and butter that spread in homey, irregular rounds: chocolate chip, oatmeal, peanut butter and their kind.

The word cookie is undeniably Dutch in origin (from koekje=small cake) and began to be used English-language American cookbooks by at least the 1850s. Still, what it seemed to mean at this point was a small cake, a kind of muffin, rather than what we would think of as a cookie. In those days drop cookies were mostly called drop cakes. These little cakes came here from England. The eighteenth century cookbook author Hannah Glasse has a recipe (she calls them drop-biscuits). These, however, resemble lady fingers in texture rather than what we would think of as a cookie. Closer to the idea of a cookie is something called a “rout cake.” Mary Eaton, a British cookbook writer gives a recipe in The Cook and Housekeeper's Complete and Universal Dictionary (1822):

ROUT CAKES.
To make rout drop-cakes, mix two pounds of flour with one pound of butter, one pound of sugar, and one pound of currants, cleaned and dried. Moisten it into a stiff paste with two eggs, a large spoonful of orange-flower water, as much rose water, sweet wine, and brandy. Drop the paste on a tin plate floured, and a short time will bake them.

(For an explanation of the name, see http://www.lynsted.com/html/georgian_-_rout_cakes.html.) Most drop cakes are what would consider a “cake”. And the same is true of early drop cookie recipes. The first real drop cookie recipe that I’ve been able identify (though the rout cakes do seem to be a distant ancestor) is something called “Boston Cookies” which begin to show up in the 1880s. These are essentially the earlier rout cakes but with less liquid and flour but more sugar. The Household: A Cyclopedia for Modern Homes (1881) gives the following recipe.

BOSTON COOKIES.
One cup butter, one and one-half sugar, two and one-half flour, one and one-half raisins chopped fine, one-half teaspoonful soda dissolved in a little warm water, three eggs, a pinch of salt and nutmeg and other flavoring to the taste. Mix well, roll thin, or better still, drop into the pans with a spoon and sprinkle granulated sugar over each.

When you look at the original Toll House cookie recipe, the proportions of butter, sugar and flour are identical (Nestlé later altered the proportions slightly.) This then may the direct ancestor of the drop cookie. Now to figure out whether it really did originate in Boston!

Posted by Michael at 7:33 PM No comments:

So I was in a taxi cab with an NPR reporter (busy shilling Sweet Invention, my new book on the history of dessert) when he told me a story that I find just fascinating. He was originally against the idea of having a wedding cake at his nuptials but he eventually relented, but in a rather singular way. He and his bride to be decided to replace the usual multistory extravaganza with a wedding-cake-shaped piñata and fill it with small bottles of booze and Twinkies. To top it all off, the couple placed sugar day of the dead skulls on top. I have to say that I was equal parts fascinated and horrified.

Having spent the last couple of years delving into the symbolic baggage of desserts (chocolate money, Barbie cakes, bone-shaped cookies, and so on) I couldn’t but stop and rejoice at all the symbolism inherent in bashing apart a symbol of wedding bliss filled with toy-sized bottles of booze and sweet relics of childhood. 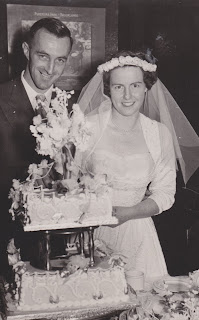 Let me very briefly note the symbolism of the more ordinary wedding cake (or bride’s cake as it was sometimes known in the 1800s). In those days there was a kind of parallel between the virginal bride and the white-frosted cake, sometimes made explicit by the orange blossoms placed on both the bride and cake. The fashion for these white cakes originates with multi-story confection created by (mostly likely) Alfonse Gouffé for the wedding of the future King Edward VII and Princess Alexandra of Denmark. The idea caught on and white wedding cakes (they used to be pink or even red) became de rigueur.

One anthropologist has noted that the act of the newlywed husband and wife plunging a knife into the cake represents the consummation of the marriage. If that is the case what does the smashing of the piñata represent?

The next step is, of course, to share the cake among the guests. They are, in effect, the witnesses of the marriage act. The cake, quite literally embodies this. You can draw a parallel to the sharing of the host in a Catholic mass. So what does it mean to consume a plastic-wrapped, industrially-produced mélange of chemicals? Moreover one that is associated with childhood? Are we bearing witness to the creation of a new consumer unit with child-like impulses born out smashing apart a traditional symbol of marriage. Then there are the toy-sized bottles of booze. In the nineteenth century, candy manufacturers used to make sweets in the shape of gin bottles, guns and cigars so that kids could play at being adults. Like so many of candy-like cocktails popular today, the little bottles seem to point to the fact the line between child and adult is little more than a blur. But what should we make of the sugar skulls? An ironic reminder that all, including symbols and marriage, are as dust to dust? Or just more spooky candy, no more threatening than Jack-o-lanterns on Halloween. Well I guess kids will be kids…till death do us part.