I was recently in Paris, in part to interview the master pastry chef Pierre Hermé. In case you haven’t leafed through a Paris Match in the last dozen years, Pierre Hermé is one of those French culinary hypercelebrities, appearing regularly on television programs to deconstruct the state of French cuisine today. All the same, his celebrity is of an older more glamorous variety. He has not yet degraded himself by appearing on

Iron Chef. He is a recipient of the Légion d’Honneur, his nation’s highest honor. He brought a new spirit of inventiveness to French patisserie and as a consequence the French press has branded him with the rather dreadful moniker of the “Picasso of pastry.” 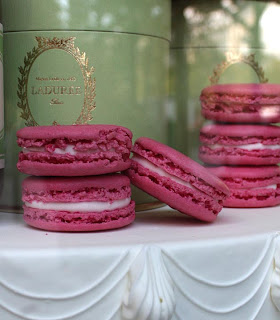 Macarons at Ladurée in Paris
I mention all this simply to contrast his fame with his personality which is entirely generous and free of any pretension. Hermé has the easy grace of the truly successful. We met in his miniscule office above his boutique in the ever fashionable Faubourg St.-Germain. The boutique is tiny and resembles an ultra-trendy jeweler more than a pastry shop. Each sweet sparkles under the carefully arranged spot lights. You can only fit in about a half-dozen customers at a time so naturally the line snakes out the door and down the block. (Hermé is a master of PR.) Upstairs, our conversation inevitably led to the macaron for this is the maestro’s claim to fame. Displaying no false modesty, Hermé admits to having started the macaron fad that swept pastry shops across the world in the last decade.

For those who haven’t visited a pastry shop in the last five years I should explain that the macaron is a confection of sugar, egg whites and almonds and goes back to at least the seventeenth century. I had always assumed that it was one of those Italian imports that arrived with Marie de’ Medicis or one of her crowd, but I have begun to have my doubts. I just can’t find any use of the term in Italian that doesn’t refer to pasta (or an idiot). (How “maccheron,” meaning pasta in both its meanings would become almond cookies is baffling to me—nevertheless the Académie française dictionary insists this the French word’s origin.) But whatever its origin it became a classic of the French pastry repertoire. There were lots of variations, including macarons stuffed with jam but it wasn’t until the 1940s (?) that someone had the bright idea of sandwiching two of these delicate cookies together with buttercream. And it wasn’t until the late 1990s that they became a multinational phenomenon and for this we have to thank M. Hermé. Bored of plain old chocolate and vanilla he started infusing his macarons with flavors of roses, green tea, licorice but also with such things as wild rose, fig and foie gras (that’s one in one macaron, mind you). Next thing you know, pastry shops in Los Angeles, New York, Brussels and Vienna had leapt onto the idea. Today you can walk into Picard, the French frozen food chain and pick up a selection of macarons with flavors like basil-lime, white peach-rose, and yuzu praline!

So why the obsession? I have a couple of notions about that. At their best the macarons are genuinely delicious. The intensity and clarity of the flavor translates into pure, uncomplicated pleasure. They are also small so that they are a practically guilt-free dessert, so important in this day and age when we give up pleasure so that we may prolong our joyless lives as long as possible. The flavors are often exotic but safe. They’re difficult to make so that we can exercise our connoisseurship by finding the very best producer—yet they’re informal. You eat them with your hand. It’s all so very 2010 (or perhaps 2005). 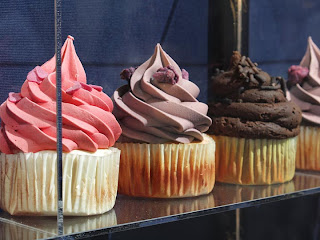 Cupcakes at Gerstner in Vienna

Now even as macarons have swept the French-style pastry shops in the United States there has been a local fad that is oddly analogous, mainly for cupcakes in an equally wide panoply of flavors (bacon, “chai-latte,” tiramisu, peanut butter...). For years it was a staple at children’s birthday parties, and like the macaron of old, in no more than two or three flavors. However unlike the macaron you need virtual no culinary acumen to make a cupcake. Most people make it from a cake mix. And like macarons, cupcakes have gone global.

The two desserts aren’t strictly analogous but I do think they give you insight into the state of European and American culture today. Increasingly, the old bourgeois structure is breaking up in on the old continent to be replaced by something at the same time more cosmopolitan yet attached to some hypothetical Europeaness. Luckily so far it has only been nationalism lite (if you set aside the Balkan conflagration). It would be interesting to analyze the exotic flavors of the macaron and where they come from. I bet it isn’t Africa or the Muslim world. In France the flavors often come from herbs or those extra-safe foreigners, the Japanese. Yet even while the macaron may be informal it is still a very adult-sort of treat. There is still a line drawn between childhood and adulthood by most Europeans.

But in the United States a youth culture has been dominant ever since the baby boomers hijacked the nation. In America, the ideal age is about 16. Old enough to drive and screw but as yet with many of the tastes of childhood. When not at work, the average American man dresses in sneakers, jeans, tee shirt and a baseball cap, the uniform of a twelve-year old. To an enormous extent these tastes apply to food as well. Sweet is the favorite flavor in America, whether in pasta sauce, bread, ketchup, breakfast cereal or 90% of all beverages. American’s love eating food by hand. Think of sandwiches, hot dogs, hamburgers, burritos and, naturally, cupcakes. The cake you don’t need to eat with a fork with a gooey uncomplicated appeal to childhood, much like the rest of American mass culture. It is the perfect dessert.

Yet as different as the two cultures are we all know how they are gradually turning into one. Walk through a typical European airport and it’s hard to tell anyone apart by dress alone any more. The fashion-makers across the world are using the same media to set their trends in motion. The most recent trend out of France seems to involve marshmallows (guimauves) a treat that seems almost as binational and infantile as Jerry Lewis.