All in the Name of Science

So I thought I would test out the hypothesis whether you could make a Sacher Torte in 1832, or at least whether the chocolate was up to snuff. The first trick, of course was to get chocolate that would have been made the same way it was back then. Mexican chocolate is, sort of, though the brands typically available have cinnamon and sometimes almonds added to them. Luckily Taza Chocolate in Somerville, MA is making a stone-ground chocolate that is made, as best as I can figure out, much the way Baker’s and other companies would have made their chocolate a couple of hundred years ago. 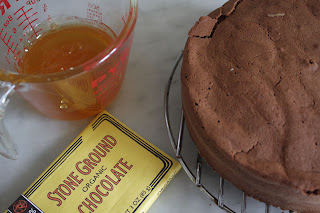 I spoke briefly to one of the Taza owners, Alex Whitmore, and he explained how the chocolate is ground, mixed with sugar and then passed through granite rollers to smooth out the texture. No conching. And that’s critical because it is the invention of conching that created the really smooth texture we’re all used to now. Alex describes conching as a little like a long (mechanical) process of kneading the chocolate base which, rather than making the particles of cocoa smaller, smoothes their edges. It also mellows the flavor—you apparently loose the sour edge that chocolate naturally has. I have to say that I find the sour, almost spoilt milk flavor, of Taza off-putting. But then I grew up on Lindt and its likes. Americans who grew up on Hershey’s—which most European chocolatiers criticize for exactly this sour milk flavor profile—would probably like it. It is gritty though.

At any rate, if there is a chocolate that resembles the chocolate circa 1830, this is probably it. And how did it work on the Sacher torte, or more specifically the glaze? I can report that it did just fine. It melted a little more unevenly than normal but otherwise it behaved perfectly adequately. The resulting glaze was shiny and smooth, just as it should be. (I did overcook the glaze a little—I find it hard to get right when I’m making just a little glaze—but it still worked.)

The recipe I used was loosely adapted from Rick Rodger’s Kafeehaus, probably the best Viennese dessert book in English. His history is shaky but the recipes work. I wanted to make a 7-inch cake so I beat 6 tablespoons butter until smooth, beat in 2 3/4 ounces of bittersweet chocolate and 4 room yolks. Then I beat 4 whites until semi-stiff, beat in 7 tablespoons sugar until meringuish. This I folded into the yolk mixture, then folded in a half cup flour. That was baked in a (buttered and floured) 7-inch springform for about 45 minutes at 350°F. This was chilled to room temperature and flipped up-side down. 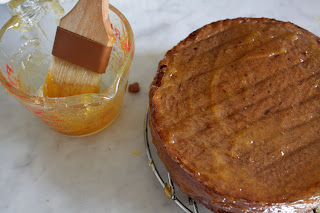 Then there was the apricot glaze made by boiling down apricot preserves until thick and syrupy (make sure you buy preserves made with sugar not corn syrup!) then strained and brushed all over the cake. 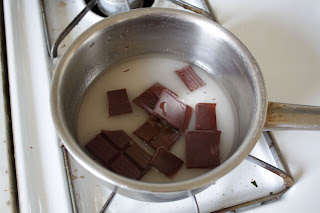 Finally I took a 3-ounce bar of Taza 60% Stone Ground Chocolate, combined it with 3/4 cup sugar and about a third cup water. This was simmered until glaze consistency. 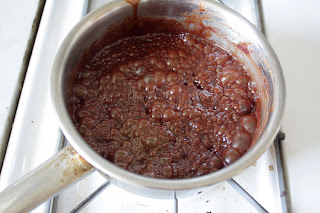 Rick says to cook it to 234°F which is all very well, but try getting an accurate measurement from a half-cup of glaze! I usually test it by dropping a few drops on a frozen ceramic plate. You want the consistency of fudge, more or less. Finally, I spooned the glaze over the cooled apricot glaze. 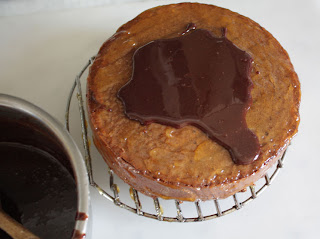 Incidentally, the cake shouldn’t be refrigerated. It will keep fine, covered, for a couple of weeks. In a sense that’s the whole point of it. And yeah, you have to serve it with Schlag—whipped cream. Did the 15-year-old Sacher really invent this on the spot? My guess is that it took some years to get it right. But there is no reason to think that he couldn’t have due to the ingredients on hand at the time. 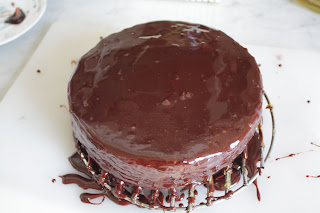 Posted by Michael at 4:44 PM No comments: